Sandtray therapy is a humanistic approach. Therapists help clients find solutions to their problems, using the sand as a tool for healing. Through creative expression, clients are able to manifest in sand the things they would otherwise not be able to vocalize or address in traditional therapy. The therapist views clients as whole, knowing that the process of sandtray therapy will allow them to find the answers that are already within them!

What is Sandtray Therapy? 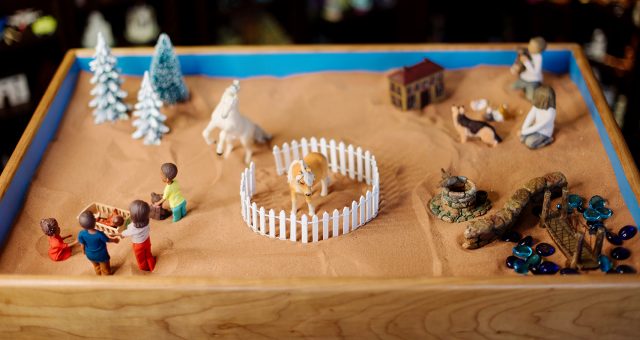 Sandtray therapy is a technique that can be used to foster healing in adults, adolescents and children, allowing them to express their thoughts and feelings when words alone are not enough. A sandtray therapist’s office is equipped with a specially proportioned sand tray with a blue interior, a variety of sands and a large array of miniatures (e.g., human figures, fantasy & folklore figures, animals, buildings, objects from nature, vehicles, and more!). The miniatures represent all of the elements of life – the good, the bad, the beautiful and the ugly. The therapist, who has been specially trained in the use of the sand tray, provides an accepting environment in which the client is invited to create a world in the tray using the sand and miniatures.

How does it work?

People think not only in words, but also in images. The use of the sand and miniatures activates this nonverbal way of thinking, allowing the client to express images, emotions, perceptions and conflicts about which they may not be able to put into words. The meaning of the work in the tray emerges as the client shares the world/scene created with the therapist. Through the use of sand tray, emotional struggles which previously were not conscious or could not be talked about, are brought into awareness so they can be understood and resolved. An increasing capacity for self-expression, self-awareness and communication can be developed through the use of the sandtray. 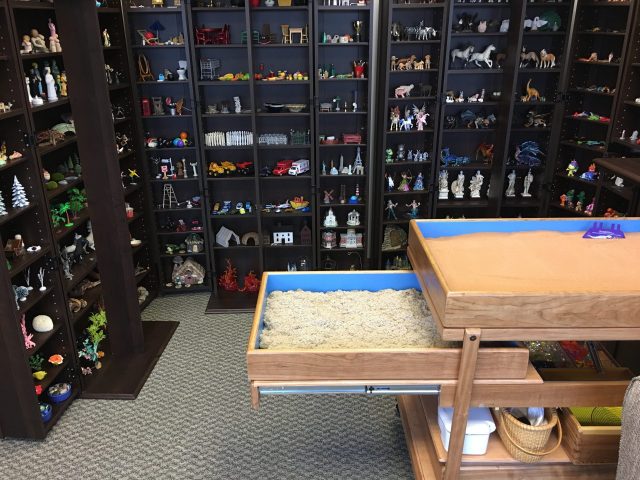 Who can benefit from sand work?

Children frequently gravitate to the sand because “play” is their natural form of communication. Sandtray is also a powerful tool for adults and adolescents, particularly when they becomes ‘stuck’ in talk therapy. Creativity is not a requirement! There is no right or wrong way to build a world in the sand. There are no rules, nor restrictions in the process, just the willingness to experiment and explore.

Although sandtray therapy may look like child’s play, it is a highly therapeutic technique that can provide emotional release and insight for anyone in therapy. The therapist creates an environment free from threats and judgments, allowing the space for healing. The miniatures often pull for emotions, and potentiate the unlocking of deeper memories and feelings. By beginning to facilitate change on an external and concrete level, a person can gain the courage and ability to recognize that change is possible outside of the therapy session.

While the sandtray process involves creating a series of trays and might last for months, significant change may be experienced in just one sandtray session.